Selena Marie Gomez (born July 22, 1992) is an American singer and actress. Having appeared as a child in the children's television series Barney & Friends, Gomez rose to fame as the leading role in the Disney channel series Wizards of Waverly Place (2007–12). Due to the success of the series, Gomez worked on various films, television shows, and musical collaborations for the network in the following years. She signed a recording contract with Hollywood Records in 2008, and subsequently formed her band Selena Gomez & the Scene the following year. The band released three studio albums by 2011, each of which sold over one million copies worldwide.

Gomez hoped to focus on her acting career by transitioning into film work, earning starring roles in films such as Ramona and Beezus (2010) and the romantic comedy Monte Carlo (2011). Gomez hoped to achieve a more mature image with a role in the exploitation film Spring Breakers (2013), as well as with the release of her solo debut album Stars Dance (2013). The album debuted atop the Billboard 200 in the United States, and included "Come & Get It". Gomez embarked on her Stars Dance Tour (2013), though it was later cancelled due to personal and medical struggles. Gomez revealed in 2015 that she entered rehab due to being diagnosed with lupus.

In 2014, Gomez fired her parents as her managers, and signed with the WME and Brillstein companies. During this time, she signed a new recording contract with Interscope Records, releasing a compilation album as her fifth and final release through Hollywood Records. Gomez released her second studio album, Revival, in October 2015. The album debuted at number one on the Billboard 200, while the first three singles all topped the Mainstream Top 40 chart in the United States. She embarked on her worldwide Revival Tour in 2016. Gomez is currently working on her third studio album.

Gomez has branched out from entertainment, releasing her own clothing line through Kmart in 2010 and a self-titled fragrance in 2013. Gomez formed her own production company in 2008, titled July Moon Productions; she is set to produce the Netflix original series 13 Reasons Why. She has worked with various charitable organizations for years, and most notably became a UNICEF ambassador at the age of seventeen. Since the start of her career, Gomez has went on to sell over 6.7 million albums and 22 million singles worldwide, according to Billboard. Gomez has earned a number of awards and nominations for her work as an actress and singer, and has won an MTV Video Music Award, a Billboard Women in Music award, an iHeartRadio Music Award, two People's Choice Awards and twelve Teen Choice Awards. 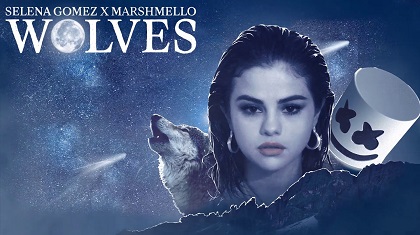 The Heart Wants What It Wants

Lose You to Love Me