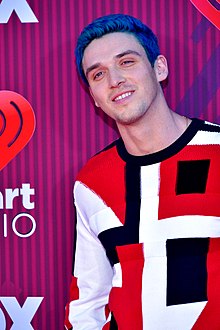 Lauv whose real name is Ari Staprans Leff is an American singer, songwriter and record producer. Drawn to music since childhood, he learnt various instruments and formally studied music before getting a degree in music technology from the New York University.

After graduating, Lauv signed up with Prescription Songs, an American music publishing company. In September 2015, he released his debut play record ‘Lost in the Light’, which contained five songs, including his first hit ‘The Other’. In 2016, he released the single ‘Question’, which featured Travis Mills in the video. This song was certified gold by the RIAA and MC. His only other release from this year was ‘Breathe’, which he co-wrote with Michael Matosic and DallasK. For the remainder of the year, Lauv mostly assisted other artists.

In January 2019, Lauv collaborated with the Australian singer and internet sensation Troye Sivan for the song ‘I’m So Tired’. The video of the song touched 1 million views within days of its release on January 24. Lauv is currently busy with his tours and has announced a tour in Asia next. He plans to perform in Thailand, Indonesia, and India, among other countries. Tickets to his concerts have already been sold out, and Lauv is well on his way to become a massive star.