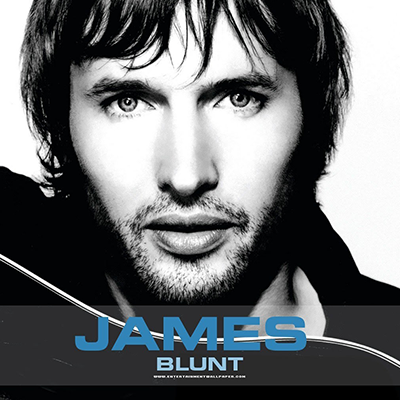 James Hillier Blount (born 22 February 1974), better known by his stage name James Blunt, is an English singer-songwriter and former soldier. He had signed with EMI before securing a recording contract with Atlantic Records and Custard Records.

Blunt rose to prominence in 2004 with the release of his debut studio album Back to Bedlam, before achieving worldwide fame with the singles "You're Beautiful" and "Goodbye My Lover". The album sold over 11 million copies worldwide, topping the UK Albums Chart and peaking at number two in the US. Blunt's second album, All the Lost Souls, which was released in 2007, topped the charts in over 20 countries and produced the hit single "1973". His third album, Some Kind of Trouble, was released in 2010, after its lead single Stay the Night. A deluxe edition was released the following year, titled Some Kind of Trouble: Revisited. In 2013, he released his fourth album, Moon Landing, which was preceded by the lead single "Bonfire Heart", which peaked at number four in the UK Singles Chart following promotion on The One Show and The Graham Norton Show, as well as receiving extensive radio airplay.

Blunt has sold over 20 million albums and 17 million singles worldwide, with his debut album, Back to Bedlam, being listed as the best selling album of the 2000s in the UK. He has received several awards and nominations, having won two Brit Awards, two MTV Video Music Awards, two Ivor Novello Awards as well as receiving five Grammy Award nominations.

Blunt was an officer in the Life Guards, a cavalry regiment of the British Army, and served under NATO in Kosovo during the conflict in 1999. While posted to Kosovo, Blunt was introduced to the work of Médecins Sans Frontières (MSF, or "Doctors Without Borders"). Since then, Blunt has been an active supporter of MSF by holding meet-and-greet auctions at many of his concerts, and filming the documentary Return to Kosovo, in which he visited the people and places he had encountered while stationed there. Blunt is a patron of Help for Heroes, a charity aiming to raise money to provide better facilities for wounded British soldiers