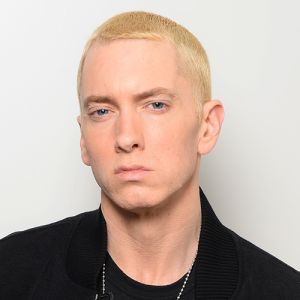 Marshall Bruce Mathers III (born October 17, 1972), known professionally as Eminem (often stylized as EMINƎM), is an American rapper, songwriter, record producer, and actor.
Eminem is the best-selling artist of the 2000s in the United States. Throughout his career, he has had 10 number-one albums on the Billboard 200 and five number-one singles on the Billboard Hot 100. With US sales of 47.4 million albums[1] and 42 million tracks as of June 2014, Eminem is the second best-selling male artist of the Nielsen SoundScan era, the sixth best-selling artist in the United States and the best-selling hip-hop artist. Globally, he has sold more than 172 million albums, making him one of the world's best-selling artists. Rolling Stone ranked him 83rd on its list of 100 Greatest Artists of All Time, calling him the King of Hip Hop.